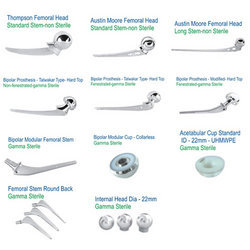 In the recent decades, various progressions in hip substitution have been created and various kinds of prostheses are obtainable. They may comprise an amalgamation of plastic (conventional hip) and metal.

The metals utilized are either titanium alloy or cobalt-chrome alloy. These are "excellent metals" originally designed for the industry of aerospace and at present adapted for orthopedics. The plastic utilized is a elevated-thickness plastic polymer known as polyethylene. Further, the kind of prosthesis utilized for surgery is observed by the surgeon and is depends on various factors like weight, body structure, height and age.

A conventional complete hip substitution exercises a ball of metal in a plastic cavity for movement. While it has superior background for durability and prolonged life span, the plastic erodes with every single step and can cause to ultimate slacking of the hip substitution. This activity can take up to two decades and is not an issue for majority of patients.

Conventional Hip utilizing 28 MM ball, which is approved by FDA.

Nevertheless, adolescent patients may require their hip to stay protracted. To generally mark this problem, we employ a socket and ball of metal-on-metal, which greatly minimizes wear rates. In laboratory imitations, the abrade pace of metal-on-metal is 1000 times less than that of conventional metal on plastic.

At the same time, metal-on-metal do not possess the evidenced track information of metal on plastic, it is thought that it has power to stay protracted than the conventional hip substitutions. This process has been utilized properly for recent two years with precise early outcomes.

Thank You for your valuable time. We have received your details and will get back to you shortly.

×
Get a price quote for Hip Prosthesis
×

For immediate response, call this customer.

Get in touch with us
ACE ORTHO CARE PVT. LTD. All Rights Reserved.(Terms of Use)
Developed and Managed by Infocom Network Private Limited.

For immediate response, call this customer.